Greek Archbishop: Islam Is a ‘Political Party’, Not a Religion

Greek Archbishop Ieronymos II of Athens has stated that he views Islam not as a religion but as a “political party”, and its followers as a “people of war”.

The Greek Orthodox Archbishop stated his views on Islam while speaking on the role of the Orthodox church during the 1821 revolution which saw Greece gain independence from the Islamic empire of the Ottoman Turks. 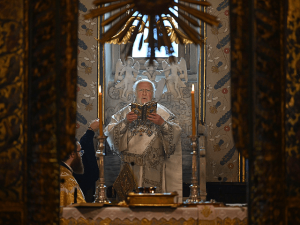 He went on to add that the clergy of the Orthodox church was heavily involved in the Greek war of independence and that this was the reason so many flags during the revolution featured Christian crosses.

The comments from Ieronymos II come just months after he condemned the move by Turkish president Recep Tayyip Erdogan to convert the Hagia Sophia back into a mosque, 86 years after the former cathedral had been made into a museum.

“The insult and hubris do not attain only Orthodox Christianity, or even Christianity as a whole, but the whole civilised humanity, any thinking human being, irrespective of religion,” Ieronymos II said last July.

The Greek archbishop is not the first senior clergyman to criticise Islam in recent years. Monsignor Carlo Liberati, Roman Catholic Archbishop Emeritus of Pompeii, stated in 2017 that Europe would soon be Muslim.

“In 10 years we will all be Muslims because of our stupidity. Italy and Europe live in a pagan and atheist way, they make laws that go against God and they have traditions that are proper of paganism,” he said, adding: “All of this moral and religious decadence favours Islam.”

French Archbishop of Strasbourg Luc Ravel also spoke out on the spread do Islam in his country, saying: “Muslim believers know very well that their birthrate is such that today, they call it… the Great Replacement, they tell you in a very calm, very positive way that, ‘one day all this, it will be ours’.”